Few things could reduce me to tears on the spot, but apparently a humble Loyle Carner emerging onto a packed-out O2 Academy is one of them. I’d blame it on the combination of soulful samples ringing through the room, emotional whelps from the crowd and the cold and flu tablets I’d been taking…

It still amazes me how you can be rigorously bag-searched upon entering the O2, for items including chewing gum, yet people can be puffing like chimneys on weed and cigarettes when you’re in there. Anyway, fumes aside, Loyle Carner’s set was a belter. I just wish he’d played for longer.

With a stage consisting of a sitting room-style layout, adorned with kitsch wallpaper, lamps and photo frames holding his different football shirts, it was quite the display. It lent itself nicely to the odes to his dear mum and aunt throughout ‘Dear Jean’ and ‘Mrs C’, and even nods to the patched-up relationship with his father, in ‘Looking Back’.

Given that he was promoting his latest album, ‘Not Waving, But Drowning’, Carner played a whole host of fresher tunes. ‘You Don’t Know’ and ‘Ottolenghi’ had everyone screaming with glee, while the sobering and wistful ‘Angel’ and ‘Loose Ends’ were just as much tearjerkers in person. No appearance from Tom Misch or Jorja Smith, though.

He obviously rolled out his original classics too, namely the mighty crowd-pleaser ‘Ain’t Nothing Changed’ and goosebump-inducing ‘The Isle of Arran’.

Thank God for the encore — ‘No CD’ is one of my personal favourites, so I was buzzing that it wasn’t left out. But it wouldn’t have mattered much if it had been — despite the smokers, rowdy fans and a few little teens muscling into the space I’d taken, it was one of my gig highlights of 2019. Hands down.

Loyle Carner is one of the most honest and appreciative talents out there, and he puts so many artists to shame. He’s a treasure to hear speaking and a pleasure to watch performing. A legend, a visionary, a rap icon in the making, and one I’d jump at the chance to see again. 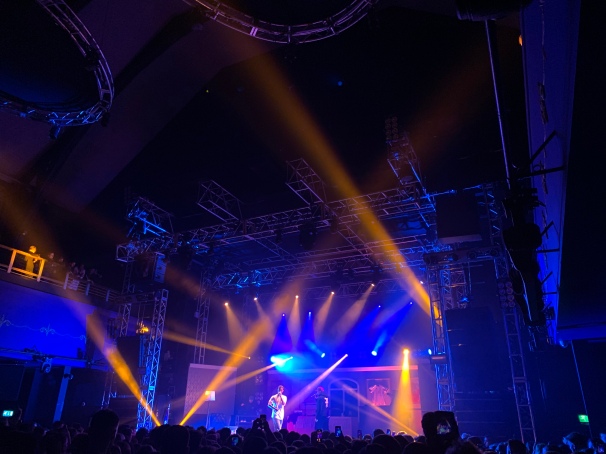 The throwback beats and Stranger Things vibes on @andreww_bambi’s new single, ‘Surprise’, are just divine. Review via the bio link.
🌊 INTERVIEW WITH SWIM SCHOOL 🌊 Utterly buzzing about this one! My chat with the insanely talented Edinburgh band online now. Link in bio x
Friday isn’t the only day for new releases! The gorgeous new single from @wynonaband is out now. Link to review in bio.
Friday night at Òran Mór was heavenly. Full review of The Ninth Wave, with support from kitti and Faodail, online now. Link in bio 🎇
@missingrecordsglasgow have done it again. HAPPY FRIDAY INDEED.
Full review of ‘Embark On The Wood’, the brand-new single from @everythingaftermidnight, online now. Link in bio.