If you haven’t heard of Kanye West, something’s gone awry. Even your grandfather’s neighbour’s cousin will know who he is. Yeezy, the man behind the marginally-tolerable personal nickname, is everywhere — in fact, he’s made it impossible for you to avoid him in the media. Underneath the bluster of clothing lines, Sunday Service shows, marriage to Kim Kardashian and headlines about his billionaire status, he’s a rapper who changed the game. If that was the part you didn’t know, it’s because his music has evolved dramatically since the early 2000s. Let’s take a look at how he first came to fame…

Kanye West, father of four, never presented himself as someone who’d quibble about being recognised as a billionaire, start feuds with other artists or produce high-ticket trainers. This is the man who brought us Big Sean on a silver platter, helped sculpt Rihanna’s future and became best buds with Jay-Z. He founded the G.O.O.D. Music label in 2004, which has seen Common, John Legend and Kid Cudi on its roster. He’s not just a legend in his own circles — he’s influenced rappers indirectly and is a household name on the radars of most. And although he’s matured, his development into a hip-hop heavyweight has been longstanding and one of incredible note.

From the age of five, the modern history books note that Kanye began scrawling down poems that ignited his passion for rhyme. As he got older, his desire to make it in the music industry grew tenfold, which is why he dropped out of college when he was 20, to pursue a proper career as a rap artist. Kudos to him — that choice clearly served him well.

He dedicated much of his time throughout the 1990s to improving his production skills, working with other rappers to hone their sounds. He then had a hand in sparking life back into Jay-Z’s allegedly floundering career.

It wasn’t until 2004 that Kanye finally pierced into the sector and, almost in partial tribute to him leaving school, he released ‘The College Dropout’. It set his stall out as a major musician in the making, and his lyrics were honest, humble and grateful — which is particularly well demonstrated in the wistful grace of ‘Family Business’. It’s treasures like these that make me revere and respect him, which has definitely become muddied by how his path has latterly taken a few rogue twists.

When people talk about what’s memorable within Kanye’s career, it has to be his 2005 sophomore album, ‘Late Registration’. Peppered with tear-jerkers, soul samples and stellar collaborators, it was revolutionary. To me, this is what is synonymous with Kanye. The raps, rhythms, rhymes, cutting lyrics, solid beats and cleverly-inserted nods to music moguls should be why he’s recognised. He enlisted Maroon 5’s Adam Levine for some angelic hooks on ‘Heard ‘Em Say’, Lupe Fiasco for the iconic and epic ‘Touch The Sky’, Jamie Foxx to top off the oh-so-catchy ‘Gold Digger’ and ripped the chorus from Shirley Bassey’s Bond theme to create ‘Diamonds From Sierra Leone’.

It’s the curveballs in life that manipulate our characters and make us who we are. In November 2007, Kanye lost his mother. Donda West was not only his mum, but his manager — she was there every step of the way, from arranging his musical affairs to his personal ones. The fact that she had undergone cosmetic surgery the day before is something that those around him claim Kanye found especially difficult to come to terms with.

This all happened at a time that should’ve been generously sprinkled with highs, rather than acute lows — his third record, ‘Graduation’, had dropped in September of the same year. That’s where he gave us the well-known banger ‘Stronger’, beautifully piano-led ‘I Wonder’, mood-enhancing electronics of ‘Good Life’, with T-Pain, and brassy, boastful ‘Can’t Tell Me Nothing’. This is where you could publicly pinpoint his desire not just to achieve, but to be the best, the boss… a god, of sorts. Starting with “I had a dream I could buy my way to heaven” outlines his deep connection to religion, but when it’s followed shortly after with, “I told God I’d be back in a second / Man it’s so hard not to act reckless”, you start to identify where Kanye’s ego was expanding.

His honesty was exposed a bit more blatantly throughout ‘808s & Heartbreak’, which has often been perceived as Kanye’s most revolutionary album, due to its many differences and lay-it-all-bare attitude. Past the vocoders and thumping drums you’ll still pick up on, tinkling piano notes are far more prevalent and the bragging toned down a notch (albeit when you disregard ‘Amazing’).

Those who know me will be well aware that his 2010 release, ‘My Beautiful Dark Twisted Fantasy’, is firmly etched onto my list of favourite albums. It was a critically-acclaimed piece that not only showcased Kanye’s personal talents, but those of his musical nearest and dearest. The searing guitar riffs of ‘Gorgeous’ were overlaid with his own vocals and the dreamily-deep tones of Kid Cudi. Raekwon was also in on that uber-tune. It forges rap with a grungier persuasion not typically harnessed by Kanye, which is a marriage that will always get an easy gold star from me.

‘POWER’ fused a medley of samples, which gripped the ears of many — so much so, it was selected for the official Forza Motorsport 4 trailer and later featured in a plethora of TV episodes, notably Gossip Girl, Limitless and Ripper Street. But the triumphs didn’t stop there — the record was a compilation of hits made with his big-name friends. We’re talking Rihanna on ‘All Of The Lights’, Jay-Z, Rick Ross, Nicki Minaj and Bon Iver on ‘So Appalled’, and John Legend on the romanticised ‘Blame Game’. Impressive, right?

Since ‘Watch The Throne’ and its hotly-tipped, gold-adorned successes in 2011, Kanye’s been very busy musically. But his aim to keep working on and releasing new sounds has overridden his absolute ability to craft genuinely wholesome songs, or at least that’s how I feel. ‘Yeezus’ typified where things altered, in my eyes. While I can’t deny how fantastic ‘Blood On The Leaves’ is, I wish it hadn’t been used in the same album as ‘I Am A God’. Don’t get me wrong, I wouldn’t turn it off, but I wouldn’t request it, either. It’s egotistical and arrogant, but maybe that’s how you push yourself to stand out as an artist? Perhaps this is merely how you carve yourself out among the upper echelons of rap.

‘The Life Of Pablo’, ‘ye’ and ‘JESUS IS KING’ all follow suit. They possess bursts of magic that pop out from pits of otherwise bland, not-exactly-quintessential-hip-hop sounds that employ boastful, self-righteous quips. It’s not the material I’m as keen on, in any case. However, you do hear some richly enjoyable, effervescent pieces on his joint work with Kid Cudi in their ‘KIDS SEE GHOSTS’ side project.

What’s more, we’ve also since seen Kanye West become a father, media figurehead and husband to reality TV personality, Kim Kardashian. That’s led to him dabbling in fashion, too. His clothing lines and Yeezy sneakers continue to be widely sought after.

All in all, the man we see today isn’t the man Kanye originally was. But it’s only normal to adapt oneself in life. He’s become a family man who’s rearranged his sound to enhance his musical repertoire. Maybe he’s just experimenting? Artists have to do their due diligence in this sense. He’s simply growing up and letting his cultivated rhymes do so in tandem, even if it’s forged some less ‘traditional rap’ tracks along the way.

If I had my way, we’d still predominantly get the old-school rap from Kanye, and it wouldn’t be as commonly interlaced with quirky electronics, off-kilter beats and otherworldly sound effects. It would be as humble as the college dropout who just wanted to go places. But whatever anyone says, Kanye’s a success story that warrants a standing ovation. 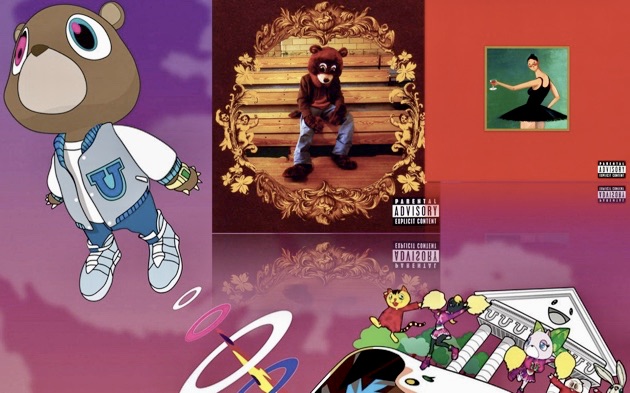 One thought on “The evolution of Kanye West”